ROAD CLOSE for the 341st CELEBRATION of ARAW NG MAKATI

Its 341st Araw ng Makati on May 29 and 30 of 2011! As usual there would be another gigantic parade to be held in Ayala Avenue so expect a road close, (trafffic nearby) for the CBD. Aside from parade there will be festivities and program hosted by the local government in Makati. And I’ve heard that Greenbelt, Landmark and Glorietta will join the celebration as they will have a big sale on May 30.

Here is the Makati Map guide for you on the said dates!

For all passenger bus:

For all PUJ and light vehicles:

Since heavy traffic is expected, taking of alternate route is advised.
Avoid the activity area.

Makati City will be celebrating “340th Araw ng Makati 2010” on June 10 to 11, 2010.
Different activities will be held within Makati’s primary are. As such some roads will be closed and traffic rerouted. Please check the following details of road closures:

1. Ayala Avenue – from Makati Avenue up to Rufino Street, both directions

2. Paseo de Roxas – from Sedeño Street up to Dela Rosa Street, both directions 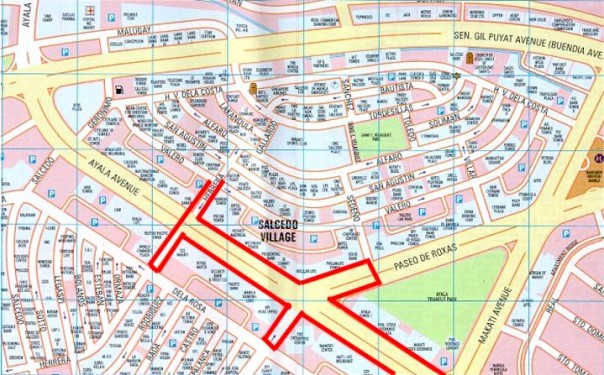 (Note: Area within red enclosure indicates closed roads)
From 12:00 noon to 4:00 PM of June 11, 2010, the following roads will be closed:
1. Malugay Street – from Pasong Tamo to Ayala Avenue and from Ayala Avenue to Gil Puyat Avenue, both lanes
2. Ayala Avenue – from Gil Puyat to Metropolitan St. & from Kamagong to Gil Puyat