← My MOVIE REVIEW of The ADVENTURES OF PUREZA: Queen of the Riles.
WESTLIFE Live in Manila! September 29, 2011 →

The much awaited series NIKITA is set to premiere on ETC This tuesday July 19, 2011. Nikita is a trained assassin gone rogue trying to stop a secret U.S. agency known only as Division from recruiting deeply troubled teenagers and training them to be assassins. 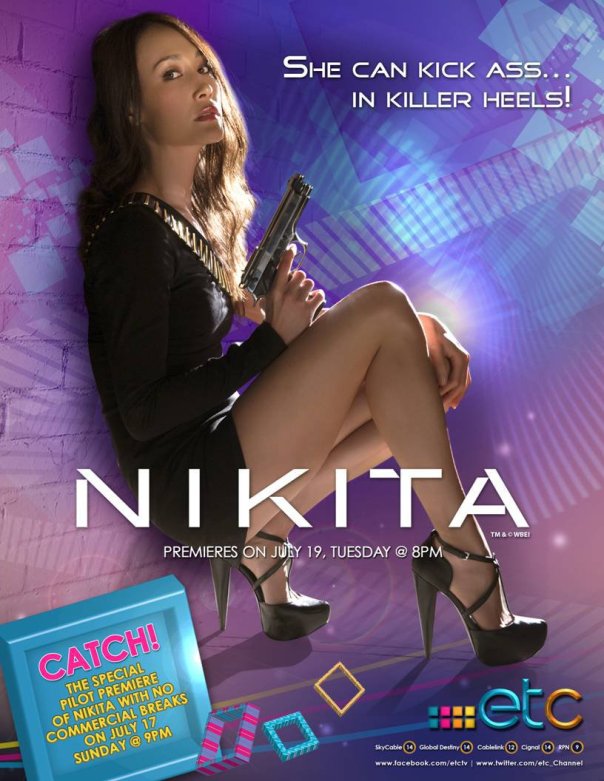 STORY: In season one of this sexy and suspenseful series featuring international action star Maggie Q in the title role, the charming and deadly Nikita waged a war against Division, the agency that created her. Michael – the man who trained her, a man she trusted – was hunting her. But Nikita had an ace up her sleeve: Alex, a girl she trained to infiltrate this secret unit of the government. At the end of season one, Nikita and Alex’s relationship had been shattered, and Nikita and Michael’s relationship was restored. Now, Nikita and Michael are on the run with a hard drive containing the government’s darkest secrets and conspiracies. Together, they are going to right the wrongs that Division has committed over the years, one mission at a time. But leading the hunt for them this time is Alex… and she knows all of Nikita’s tricks.

Nikita will also have an exclusive pilot premiere this sunday July 17, 2011 With no commercial break.

I am a writer, singer, debater, dancer, poet, declaimer, artist, narrator, and actor and recently I discover, I’m a jack-of-all-trades. I never say no when people experiment my capacity to do things that others can do. I give the superb congregation of expectation to people who doubted what I couldn’t do and I always win on convincing them I could.. follow me on twitter www.twitter.com/rodmagaru
View all posts by rodmagaru »

Posted on July 16, 2011, in ANNOUNCEMENT and tagged and Xander Berkeley as Percy., Lyndsy Fonseca as Alex and Shane West as Michael. The rest of the cast also include Aaron Stanford as Birkhoff, Melinda Clarke as Amanda, nikita on ETC Channel. Bookmark the permalink. 2 Comments.

← My MOVIE REVIEW of The ADVENTURES OF PUREZA: Queen of the Riles.
WESTLIFE Live in Manila! September 29, 2011 →